Tavis Smiley: You, And Your Scorned Titties Need To Calm The Fuck Down!!! 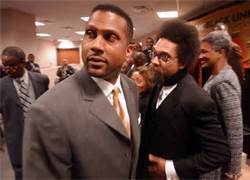 Tavis Smiley is not new to criticism here at the GetReal. I have spoken often about what little respect I have left for his hating ass, and his favorite sidekick Dr. Cornel West, so I will be brief with this post that addresses Smiley’s criticism of today’s BRILLIANT response by President Obama concerning the Trayvon Martin case and racism in general.

I believe that Smiley is  genuinely concerned with nothing but self-promotion. He runs his mouth about concerns of the poor, yet, he has been lying in a bed of endorsements for his bullshit with Wells Fargo-one of the best known companies, that had its foot illegally so far up the ass of  of many African-American “homeowners” during the real estate collapse of recent years. He masks his outright hatred/jealousy of Barack Obama behind phrases such as “I want to hold him accountable” and “Obama is the first president who hasn’t invited me to the White House.” Ever since then Senator Barack Obama turned down Smiley’s invitation to his 2008 “State of the Black Union“-Smiley has kept his “Obama-Hating” panties in a bunch.

It didn’t/doesn’t matter that Sen. Obama may just have been a tad bit more occupied with such an “unimportant” issue as preparing to run for president. Despite Barack having appeared on his show several times, Smiley chooses to act like a woman scorned. Every opportunity he gets, he is overly critical of the POTUS, and accuses him of not being concerned for the poor-especially the underprivileged in the black community. Check out the link above that proves my point. Tavis Smiley might just have titties, and a vagina, because every chance he gets=He tries to  literally FUCK “OUR” president.~Daryl

Obama, Smiley, West, and the Politics of the Messiah

Obama, Smiley, West, and the Politics of the Messiah.

From the blog Jack and Jill Politics