Conservative, Tea Party driven devils are trying to turn our attention away from the issue at hand by accusations of supposed sympathy for murdering sociopaths that will think nothing of strapping a fucking bomb to their spineless backs to kill innocent people.

FUCK SYMPATHY!!! If it were solely up to me…there would be no controversy surrounding the treatment of these assholes. Once found guilty-they would be executed and buried that day. There would be no potential for controversy about prolonged torture. Despite MY personal feelings, there are laws, established for years between nations that set limits on treatment for prisoners of war. Protocols were set in place for a reason, not for U.S. to pick and choose when to violate them.The combination of two wrongs…are seldom right. 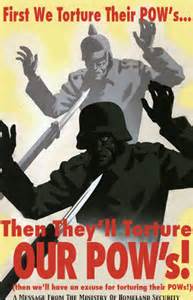 We cannot bitch and moan at the horrific beheadings at the hands of ISIS while secretly possessing the same barbaric mindset. Are we a beacon on the hill, shining brightly, guided by principle, or do we principally promote the dark side of our failure at being human?

The barbaric acts of sexual molestation and other unacceptable torture methods do nothing to gain verifiable intelligence-this has been proven. They do everything to continue degrading our reputation and threatening livelihoods both here…and abroad.

Conservative scum buckets are outraged at 3000 lives lost on 9/11.They also falsely claim that shedding light on their leaders lies about torture will jeopardize lives today and tomorrow. According to them, Bin-Laden was only killed, because a terrorist with a feeding device illegally embedded in his ass, told them EXACTLY where he could be found.According to them, President Obama personally released this information for political retribution-he is trying to distract from Obamacare, Benghazi and immigration. Always blaming Barack, for their blockheaded insanity.

These dregs of humanity don’t care about innocent lives lost on that fateful Tuesday morning over 13-years-ago. Anyone, with an ounce of common sense can see this. They want U.S. to forget about outright lies and violations that occurred as they searched for, and NEVER found a solution for the same barbaric behavior they denounce, yet practice. It’s not a total surprise that they refuse to take ownership for any of their hypocritical nonsense. Politicizing the loss of life…to mask, and make excuses for their own demonic agenda-is universally unacceptable…and beyond deplorable for OUR democracy.~Daryl 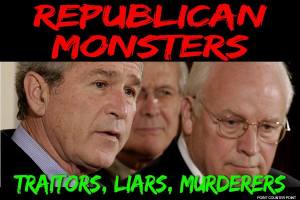